Recently, my wife and I went to another ultrasound appointment. During this particular one, not only did we see (!) the baby’s heartbeat, but she–yes, she!–was literally moving around. My wife said that “it’s like when you get in the tub with barely any water as a kid and just slide up and down.” It was like that.

Seeing that and hearing her heartbeat for the first time were experiences I’ll never forget. They brought me extreme joy! I couldn’t stop smiling.

Later that day, there was a tweet that made me think about our experience and how it relates to the issue of abortion: 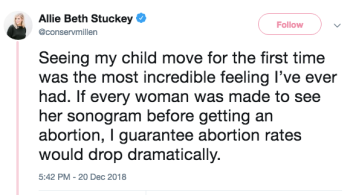 This isn’t me attempting to politicize everything. I’m not too much into politics. But this issue is bigger than politics—it’s the difference between life and death.

She makes a fantastic point. I’m not sure you could argue against it. In her following tweets (you can view them at @conservmillen on Twitter), she argued, rightfully so, that a lot of abortions happen because the people who have them don’t understand, believe—or worse, don’t care—there is a human life in there!

Our culture has bought into the lie that the baby in the womb is no baby at all, but a “clump of cells,” or just “tissue.” That is a lie from Hell. An ultrasound reveals what, in opinion, everybody already knows: human life is in there.

Abortion rates would drop. If every mother was required to see her baby moving around, there would be so many more babies alive right now.

But unfortunately, I know that people would still follow through with it. It is because we, as humans, are inherently sinful. Our hearts are “deceitful above all things, and desperately sick” (Jeremiah 17:9 ESV). We want what is best for us.

The Miracle of Life

Friends, I’ve always been pro-life, even more so now. Seeing her move around in the womb was something I’ll never forget. It also showed even more that there is life in there! A human life with a heartbeat! A distinct person with her own DNA, blood type, etc.

The creation of life is truly a miracle from God. He forms the baby in the mother’s womb (Ps. 129:13); He is behind it all. Life is sacred, friends. God is so creative, gracious, and loving to create life this way. Seeing how it happens—and seeing the baby grow—should be another indication that all the glory—praise, honor, adoration—goes to God!